Wirehaired Pointing Griffons possess the most important attribute first – being a wonderful companion.

The Chapel View Wirehaired Pointing Griffon bloodlines are second to none with part of our pedigrees coming from the Westminster Best Of Breed Winning lines derived from Flatbrook Kennels.

These are some of the most judged Griffons in the history of the breed and as we move alone with these lines we also have amazing influence from FireSide Kennels and our new European import lines coming in 2019.

As with every one of the animals and birds here at the farm, we feel that nutrition is key and essential to the development of this wonderful breed and we pass our dedication and research on to many others.

Since the hunting drive for this breed is so strong, we start our puppies at 6 weeks on feathers and then live birds so we, alongside with our clients, can make informed decisions on just which puppy needs to go to which home; Hunting, Show or family pet.

So on your search to find JUST the right Griffon puppy for your hunting, show and family pet requirements, at least stop by and meet the Griffs here. We have visitors weekly year-around and you will quickly see why we feel this is the single best breed in the world!

Keep in mind, every puppy we have ever sold here at Chapel View was spoken for prior to conception. We take breeding very seriously and we simply never have a litter……just to have a litter. These practices are ones we have been using for the past 30 years through breeding Border Collies, Cavalier King Charles Spaniels and now our beloved Griffons!

Do you have more questons?

Let us help you

We are excited for our upcoming 2023 litter which will be available in the spring! Click on the button below to contact us for more information on how to take the next step towards taking home a new family member! 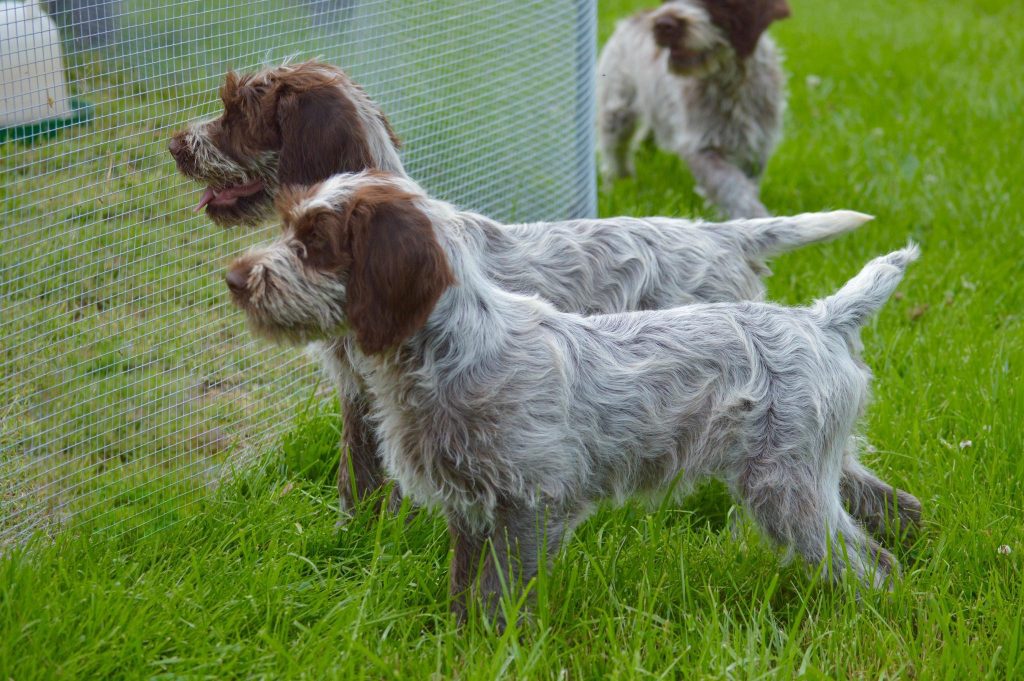 Frolic with our Griffs!

What They Are Saying!

Ranger is a star and getting treated like one by his 3 kid owners ! Grumpy Gitcher the griff is still trying to sort this guy out! Thank you for this amazing, well loved and spirited little boy!

Larry and Alex have taken the time to go over every step of the ordering and shipping process, discussed feed programs, housing, even breeding. My birds from Chapel View have produced some amazing young that have placed very high at several large shows.

Chapel View Farms is always looking for ways to make the ordering and shipping process for our clients as seamless as possible. We have laid out the process for ordering Wirehaired Pointing Griffons from our Farm and what to expect along the way. In order to continually improve this process we encourage suggestions or improvements we can make for you.

We are glad you chose to look to us for the new addition to your family so let us guide you through the process and we will explain to you how this works.

We do and can ship puppies to most parts of the US and into Canada and Europe. 80% of our clients fly in and we can meet at the airport and the puppy can be taken back in a soft-sided kennel right in the plane with you.

Shipping Certificates from our Vets are always ready the day you arrive or the day the puppy is shipped. A full inspection of each puppy by our amazing vets is our protocol and you will have copies for your records and copies for the airlines.
We have been very fortunate to have clients drive here to Wisconsin from California, Virginia, Massachusetts, Missouri, Utah, etc, etc. All clients are alway welcome to come and meet the Griffs and pick up your puppy at that time.

Shipping costs are subject to change due to airline restrictions so we will work with each client one on one to make sure all costs are determined ahead of time.

Each puppy will be guaranteed for a full 36 months for Hips, Eyes and Elbows. Clearances can not be performed until the puppy turns 24 months. We give the buyer a full 12 months to have their three clearances done. IF any of the three test would prove an issue that would cause a “quality of life” issue we will replace the puppy from a subsequent litter.

A written statement from your vet on the issue would be required to activate this clause and we may or may not require a second opinion based on the findings. In the event of emergence of any genetic disorder which is sufficiently serious in the opinion of two qualified veterinarians, one of whom selected by the breeder of the dog, the breeder agrees to replace the dog with one of equivalent quality from the first available litter bred by the breeder or, at the breeder’s option, Breeder strongly encourages purchaser to have the dog seen by a Veterinarian of purchasers choice within 72 hours of picking up the dog. Said dog may be returned to the breeder for any reason within the 72 hours following purchase.

Provided that the dog has not been damaged in any way the purchaser will then be entitled to select another puppy that has NOT BEEN ALREADY DECIDED on by any other buyer. If another puppy from this litter is not to the buyers liking after your initial selection your right of first pick will roll to the next available litter EITHER between any of the dogs bred at Chapel View Wirehaired Pointing Griffons that the breeder offers.

Whether you are new in your farm life journey or know exactly what you are seeking we are here to answer any questions you may have.

Let Us Help You